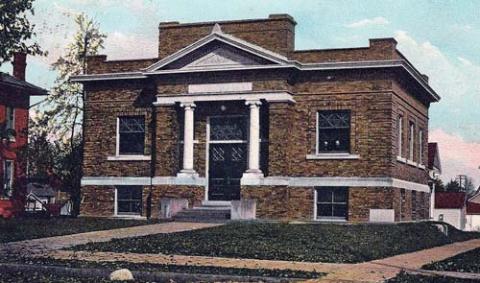 History of the Carey Library

The first circulating library in Carey was a reading room started by the Women's Christian Temperance Union and maintained by private donations. This was later passed to the control of the members of the Literary Society of the high school. This small collection of books was once housed in part of a millinery store and another time in a photographer’s studio.

Following this, there was a great surge of interest in the library project by the donation of a collection of books by Mr. W.T. Dickerson, a lawyer. The combination of these books with the books already in the possession of the Literary Society led to the beginning of the Dickerson Public Library.  Located in the public school building, this library was given financial support by the Board of Education.

However, after a few years, the funds for its upkeep were not provided and the library was not able to be used. Its friends and supporters never lost confidence in its practicality and usefulness.

Around 1900, by the provisions of a statute of the state and the favorable action of the village council, a Board of Library Trustees was appointed. A small amount of money received from a tax levy was placed in their control with which to replenish the stock of books and revive the declining interest in the Dickerson Public Library. From that time on, real interest in the library increased and although it was a part of the public school, its usefulness to the community could not be denied.

It was about this time in 1904 that Andrew Carnegie, a financier and philanthropist, set aside $43,000,000.00 to establish libraries. His plan was that any community could have a sum of money to build a library if it would supply the land and agree to furnish one tenth of the amount of his donation for the upkeep of the building.

Mr. Greeley Chambers, Carey mayor, began a correspondence with the Carnegie office in New York to obtain funds for the building of a public library.  This proved to be successful and the Board of Trustees received $8,000.00 from the Carnegie fund.

To provide a site for the building, Mr. Edwin Brown donated $5,000.00, of which $2,000.00 was used to pay for the site and the remainder used toward furnishings and books. The village had agreed to pay $800.00 or 10% of the Carnegie gift for yearly maintenance of the building and the cost of a librarian and janitor service. The library was named Dorcas Carey Public Library after Mr. Brown’s wife’s mother, Dorcas, who was the wife of the Honorable John Carey, founder of Carey.

The construction of the building was completed in 1906. The dedication ceremony was held at Snyder’s Opera House on October 19, 1906. Miss Mable Newhard was the first librarian.

The building remained the same until 1967 when extensive remodeling was done. The children’s books were then moved to the basement in what was formerly a meeting room.

In 1976, when Carey celebrated their bicentennial, the bicentennial committee chose the library as their community project.  As a result, the board of trustees was presented a check for $6,000.00. This was to be used toward building an addition to the present structure.

In 1977, the trustees had a levy passed to supplement the bicentennial committee’s gift. They proceeded with building the addition, and it was completed in October 1979. The adult section was moved to the new addition and the children’s section was moved upstairs.

In 1985, Mr. Arthur Stoll bequeathed $50,000.00 to the library for the purpose of building the second floor to the addition built in 1979. With this gift, along with money the library had accumulated in the Building Fund, the second floor was added in 1987. The adult books were again moved to the upper floor and the children’s books to the lower level.

The library celebrated its 110 year anniversary in 2016.

A much-needed outdoor storage building was constructed in 2017 with a grant provided by the Mary Martha Class Donor Advised Fund. In 2018, the library was awarded a grant of $35,000 from Upper's Winter Fantasy of Lights to remodel a downstairs storage room into a meeting room, the room's original purpose.